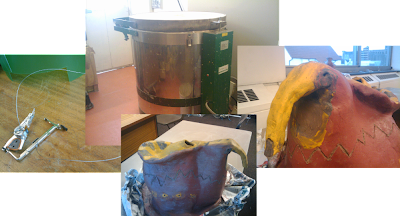 Last week I made the raku clay bird ornament in which the device will be kept, unless I can make a better one before the faire. It was a really interesting process to follow, and Hilda, the potter who showed me it, said things sometimes randomly emerge with clay, not always what you expect. I like that idea, as opposed to 3d design where you try and go for an exact shape. Also it shrinks 10% when it's fired, and so any calculations as to size or tuning would have to be done through lots of different models and trial and error, which I don't have time for as she is now going away for a bit, and I won't have access to her kiln again until after the maker faire.

I'm not completely happy with the results of my first big process of making: it's a bit small and the "bird" only happened randomly during the slab rolling process. But still, it's functional and I put a lot of stuff in it, that I know will need to go in any subsequent thing I make as an enclosure. It has only 2 openings at the top which I will put wires through and seal, it has holes in which to mount a stand, so that it can resonate a bit more fully, a small area in which to put some moss or other small plants, and a shelf inside in which to put the box with the arduino in it.


I then had a good chat with John Honniball and Tarim at PM Studios to see how to get the Maxim PMIC chips I ordered, working to power an arduino. The result is not good: there is a simple, if inefficient way to power one from a 9v battery, but the best way at the moment to get something better going, is to get a Mintyboost kit, and wire it to an 11v solar panel (which I have). The PMIC chips that Marcus Valentine suggested I use, will only work with panels of up to 5v, and anything beyond that will damage the arduino. John says it's a good idea to try the chips anyway, because if I can get anywhere with that, it will mean we can have an arduino running off very low power, and able to use that quite efficiently - so for example from a single AA battery or from a little cell battery. But most likely, it won't work.

This last week on the other hand, I've been learning about fast fourier transformations, wave table synthesis, granular synthesis and reading about the work of Ellen Fullman - who makes a long stringed instrument with a small sound box at either end for amplification. A very different design from mine. I also looked at the workings of recycled aluminium so as to create resonating cones and much more research. As well as this, I've been trying step back a bit and decide how the arduino will actually pick out the best readings and make them into a discernible song.

Firstly, it will be playing in little bursts all day. I hope this will make it more interesting and build up interest for the dusk concert. Most of the time it will just play the readings almost directly, as they are collected (which is what it is doing now), write the readings to EEPROM and turn itself off or go to sleep/power saving mode as much as it can. But if it thinks it's dusk, it will get ready to play something more complex.

In this more complex dusk concert, I want there to be single notes, with overtones and lots of silence in between, a gradual build up for each performance. There will be something resembling a trio of drone, melody and percussion, I think. This makes it easy to decide which role the 2 piezo outputs and 1 wave sample output will take on each time it decides to play.

In the style of an indian classical raga, I would then select 5 or 7 "notes" from the readings it has collected, and play them according to a repeating melody or ostinato pattern.

This would then be varied - the melody would be reached via the playing of small patterns that then build up in speed and complexity to be the pattern again.

Then this somehow builds up in speed and adds to recorded samples (played from the Adafruit Wave Shield).

Finally, it will end in a tihai figure, based again, on this ostinato.

A while ago I wrote a tabla beat that goes - if you understand this stuff,

I've been trying to decide how much of hindustani classical and world music tradition to bring in to this though. Because then the symbiotic creature might become too much a reflection of my own interpretation than a true reflection of the readings it gathers. But as a mathematician friend remarked when I told him about this project, there are an infinite amount of ways to apply maths to numbers so as to extract sound, so maybe I should stop being so precious about it.

Many cultures ancient and new have music and songs reflecting or seeking to affect the seasons or time of day however, and I think there is a lot to learn from from that in this project.

Meanwhile though, here is a sound grab of the piezo portion of the symbiot, amplified using a small bodhran drum and using a prototype clay model I've now made as a container, and as a sound box. More to come soon!