February 02, 2010
It's not very often you get a chance to work on such a varied project. The brief for the project in the previous post on this blog, but I thought it useful to put down some thoughts at this stage in it's preparation. Especially in case I get lost later on.
Last week I did the first parts: I wired together light sensor, piezo buzzer and an electromagnetic field detector and they are sending data back to an arduino that is now capable of "sleeping" - i.e. switching to a lower power mode.
There are lots of ways of getting it to fall asleep though, and I prefer no power to lo-power as Newcastle is not known for it's warm bright weather (for example - this week, according to the newspaper, sunset came to Newcastle at 4.40pm, and the average temperature is of about 4-5 degrees with showers half the time, leading me to think rain power may have been a better choice than solar).
To amplify all the recorded and generated sounds this device is beginning to produce, I got a plant pot, and an old bohdran drum, into which I put the speakers and sound emitting bits. It helped the sound be fuller and a bit louder. I'm not aiming for a very noisy device, but something that's sonically fragile and can interplay with other noises in it's area.
Here is a video of the state of play last Wednesday:
Since then I've put together lots of solar cells of various different shapes and sizes, and I tried to test their voltage and current, and wire them up to a small circuit I got from here and here. 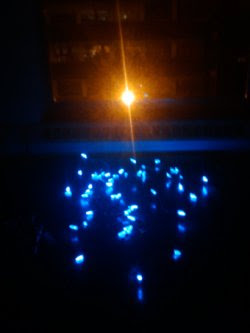 I'm planning on using some rechargeable coin cell batteries to do this. I tested the battery by putting it inside a little set of solar lights and seeing if it charged them. The lights were powered by a 3.2v, 250mAh battery, but they seem to work fine on a 3.7v 200mAh one too, all of which led me to wish I'd paid more attention in physics class at high school...
I also added the capability to detect temperature to the bit with all the sensors (the Seeduino seen in the video, which at the moment will only run sensors, before I put the whole contraption together and get it to play sounds as well).
And I've investigated a lot about clay, based on a long discussion with Mat Dalgleish. Clay and pottery is local to just about every place and culture in the world. It is strong, resistant to the outdoors (if fired at high temperatures), and above all it looks natural and earthy, and very fitting for housing all my electronic stuff, which may be functional, but it doesn't look very visually appealing!
So at the weekend, I got the (regular "das") clay out and spent a morning in the library, reading about pottery so I could get some handle on the basics. Then I started making (the children got involved too!). The result was this nice little ocarina, which actually plays a note when blown! From my discussion with Mat, and from chatting today with Hilda Bligh, a local and very experienced potter, who will let me use her kiln, we went for Raku. This is a 16th century Japanese/Korean technique which produces nice and very random colours, and can be fired at high temperatures. Hilda was very generous and treated me to some lovely soup and gave me some cheesewire, lent me a clay roller, and got me lots of nice oxides(iron, yellow iron, copper and some iron filings), as well as a big heavy pack of raku clay!
As well as this, she gave me a quick class on simple raku pottery. I'm planning to cut a slab of clay, and roll it into a cylinder. Then I'll try and shape it and glaze it. This first experiment will probably fail(she suggested I make 3 experiments to begin with), but I'll try and add a sketch of what it should look like so that it can house the arduinos, allow for leakage, provide a simple way to place all the sensors around it, and hold the solar panels high up. Also, I might add some cones or tubes to it (as I did with the first clay experiment) to make it look more like a tree...
Later this week I plan to experiment more with the thermistor (for which I'll need a thermometer...), and with all the readings on the piezo circuit. I'll also try the first step of the raku process.
The solar panels also will need to be wired together some more and tested/ experimented with for readings. Next week, I hope to finally get to the musical bit!