When getting into indigenous cultures one of the main fear is this underlying idea that they are going to be soon revealed to be backward or somehow savage, and you won't figure it out until you are tied up being slowly roasted with no white tarzan there to save you. Same goes for Aymara culture, often criticised by feminists who for example see the Chacha Warmi concept as reducing the genders to just male and female, and it's then used as the foundation of an idealised perfect community life made of people who bring out opposing complementary aspects and roles which work together to build a society.

Sexist and patriarchal attitudes are evident in indigenous circles, but also present in the countries that now exist across where andean cultures evolved before the conquest. This is perpetuated by the strong syncretic belief in Christianity and by national laws that generally favour men over women or LGBT rights.

But it's important to decolonise the binary gender which was a colonial concept, and a colonial source of much suffering and destruction. There was in fact no such primitive notion until spanish conquistadors arrived, and horrified at the idea of sodomy or trans men being respected and even necessary for Inca religious rites. Unfortunately, when we look at this information it is not clear, or readily available and the prevailing idea is that which is presented by mainstream information. So in-depth information on homosexuality amongst indigenous andean cultures is hidden in the way back archive, and it's all piecemeal bits of information that escaped being burnt and destroyed by repulsed and probably repressed conquistadors. 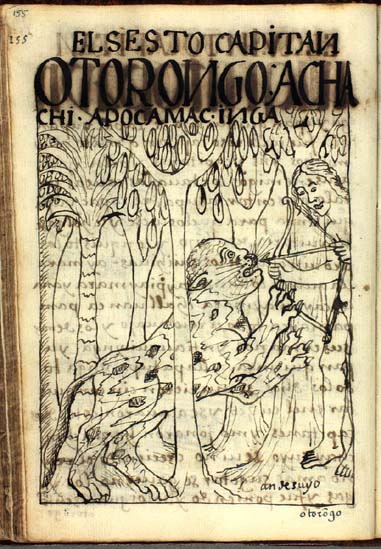 So the story is that there is an andean god, named Chiquichinchay which we have a historic record of, from an indigenous chronicler, which is a colourful blue or sometimes just golden Jaguar or Ocelot, who also manifests in the form of a cloud that brings hailstorms, is important in Inca mining practices, may originally be from the earlier Tiahuanaku culture and is the protector of two spirit people in the andes.

These people who attended the Jaguar god, for the incas at least were called Quariwarmi, which means Male-Female in quechua. They were seen as a living embodiment of the union between male and female, and so were seen as necessary to perform rites to do with these roles, which were mostly to do with the type of work you would do than with your gender identity. So homosexuality and non binary identities seem to have been a normal, in fact important, part of andean life.

Another andean word, this time in Aymara, used to describe a type of flute played in the la paz region, and as a term to describe homosexuals is Q'iwa, which I found to be described as "anything in between male and female".

We know that there was a true inquisition style destruction of andean Huacas or Wakas, the religious effigies which christians hated and destroyed thousands of across the andes, burning entire villages when saw local adherence to these beliefs was still strong. So maybe we will never know how these concepts were seen in the past, but what we do know is that gender and patriarchal stereotypes were imposed post conquest, but that andean societies were patrilineal, and there was a sense of equality whereby men generally controlled how work was done in the fields, but women seemingly controlled what happened in the home. This went all the way down to weaving, where men were taught to make thicker larger cloth, used for rugs or tarps, but women made clothing, so that none could exist without the other.

For further information: Decolonising the sodomite