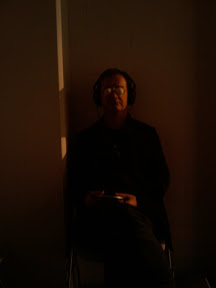 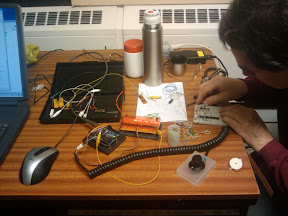 An experiment will be carried out producing 3 devices capable of inducing hallucinations through sensory deprivation.

All three devices will be usable in some way by the audience, who will be able to wear the device in a quiet area for up to 20 minutes, and will be invited to write their experiences for posterity.

Here, meanwhile is the code for device #2: the arduino based white noise generator, from Dorkbot member John Honnibal:

/*
* For a discussion of PRBS generators, see The Art Of Electronics, by
* Horowitz and Hill, Second Edition, pages 655 to 660. For more info
* on Linear Feedback Shift Registers, see Wikipedia:
* http://en.wikipedia.org/wiki/Linear_feedback_shift_register
* For the actual shift register taps, refer to this article on noise
* generation for synthesisers:
* http://www.electricdruid.net/index.php?page=techniques.practicalLFSRs
*/

void setup ()
{
// Serial setup for debugging only; slows down the program far too much
// for audible white noise
Serial.begin (9600);

// Connect a piezo sounder between Ground and this pin
pinMode (speakerPin, OUTPUT);

It works a treat! I think the arduino and it's batteries might be happy to live in a bottle with wires coming out of it into the mask. The first thought when the circuits were ready was that I'll have to add an on / off switch.

This morning I made some video of the first stages of putting together a mask for the ping pong ball eyes, hoping to mix them soon.

A simple way to apply ping pong balls to eyes comfortably is by glueing some cotton wool around the edges but I have gone for taping the half balls directly. The white mask will hopefully be a step up from this. It is not complete but will be on show, in case ideas come forward for improving it.

As you can tell, the experiment has now taken place. There are now write ups in various places, and possibly followup information on the _GNE Device and the piezoelectric earmuffs or other information will follow soon on this blog.