June 23, 2016
This post is a translation of a proposal by Susana Martín Belmonte of which the original will soon be posted!
On July 13 2016, the city of Barcelona published a government measure to create an energy operator in the city. This operator aims to accelerating the energy transition to renewable energy sources, facilitating the citizen's energy self-consumption, and providing the citizens with access to electricity generation business income, as well as addressing economic justice goals, such as ending energy poverty.

One of this project's key points is financing new renewable energy generators, and this is where the social currency that the city of Barcelona is planning can play a very interesting role.

I drafted the proposal that comes next and I shared with the economy and ecology groups, as well as the social currency group at Barcelona en Comú. In addition, this can also be framed in the working group on energy and climate change mentioned in the document.

1. The energy operator  would offer citizens to exchange euros for social currency. The incentive, for example, can be obtaining joint ownership of the panel(for example 10%). In this way, a citizen can change 100€ a month for 100 units of social currency during 20 months for example (or for the time needed in order to acquire a solar panel or associated equipment).

2. The operator would use the euros collected (some or all) to buy and install solar panels or other renewable energy generators.

3. People would use the social currency to pay for:

The system can be a mutual credit system, in which other companies and local businesses can participate. Those who sign up for electricity provision from the operator will have an additional incentive as they can then use social currency to pay for their electricity bill. It would therefore be a currency backed by green energy (at least in part: the currency could have other types of backing too). The energy operator is aimed mostly to household customers, but here I assume that some SMEs could become customers of the energy operator too.

1. Financing: An interesting amount of capital could be raised to accelerate an energy transition. Basically, the project aims to substitute euros for social currency for the purpose of  goods and services consumption, and use the euros to invest in clean energy generation instead.

2. Promoting a local economy connected to the world of energy: citizens, even with a low income, can access and take part in investing in clean energy and its benefits (both private and common) via joint ownership, without the need to save, based only on exchanging money and substituting global consumtion habits for local ones.

3. Reducing energy demand: Social currency incentivates local consumption, reduces the supply chain (in KMs) and therefore reduces carbon footprint. This complements the energy operator's strategy by reducing the city's energy demand, because if you consume a product produced within a radius of 100km you use up less energy than if you consume a product created at a distance of 1000km.

4. Local economy is boosted. Incentives can be offered so that the operator also pays citizens in for the spaces to place the panels, and for the panel's returns (when the citizen is co-owner), in social currency instead of euros. This would increase the local multiplier effect of this extra income, so it improves local employment and economic activity.

There are many other additional possibilities, but here is the outline of the basic scheme: 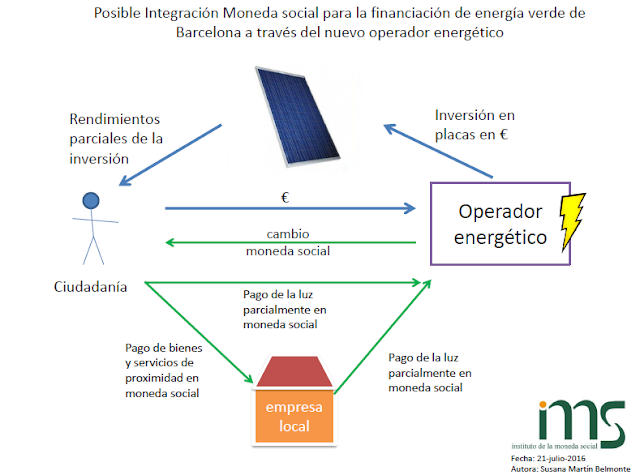 - Solarcoin: cryptocurrency (based currency block chain technology) created in 2014 to finance the installation of renewable energy generators. The market price can be followed here: https://coinmarketcap.com/currencies/solarcoin/